I’d never attended a large rally and have heard and read mixed views of them, so ummed and ahhed about this one for a month or two before biting the bullet and paying for a day ticket for the Sunday.

Arrived at 7.30am for a very easy check-in with none of the queues hinted at in the pre-rally instructions. Bought a £5 raffle ticket for the raffle whose main prizes were 10 full XP Deuses (Dei?) – 5 for each day of the rally. I never buy more than one raffle ticket because I couldn’t win a dose of plague in a global pandemic. Inevitably I didn’t win a Deus, nor one of the not-yet-available XP pinpointers. Would any one care to make me an offer on a used yellow raffle ticket? Only one careful lady owner.

Had a wander round the “village” area to look at the traders’ tents and dealers’ stalls, chatted with Nigel from Regton, met and chin-wagged with John Winter, then had a very quick look at the living history area and displays. Was amused by this in the dealers’ marquee: 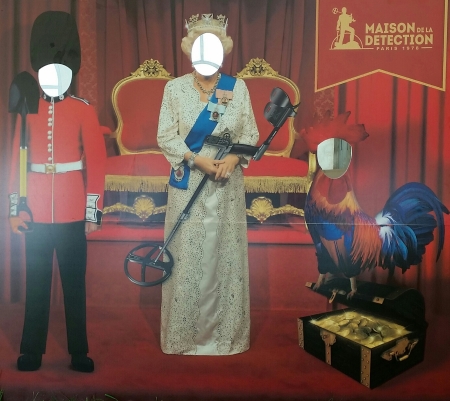 Finally decided to actually do some detecting so walked through Field 1 and started detecting in Field 2 and then Field 3. These were stubble, much of it almost impossibly long (8″-10″ by my estimation) and bloody hard work. There were also very few signs that anyone had dug anything. I found a piece of folded scrap lead.

Then the rumour spread that there had been a report over the radios that a “pot of gold coins” had been found in one of the further fields. Almost immediately nigh on everyone in sight started gravitating towards Field 34, reported site of the fabled find. The rumour was quickly downgraded to “a pot” and within the hour to a rusty bucket. Apparently as soon as the rim came into view digging stopped and a couple of the marshals were called in to have a look. All very responsible but ultimately rather disappointing for the finder.

Detecting my way up through Field 6 (bean stubble, mostly very well flattened), I was struck by how many holes had not been filled in. Deep holes. Bloody big holes. With soil scattered for feet in all directions. One pile of spoil even had dog shit curled on top. At least I hope it was dog shit, but since the organisers had actually allowed some Minelabbers on the site one can’t be too sure.

The bottom of Field 6 produced the only actual find of my three and a half hours’ detecting – what is probably a Roman grot.

Making my way up through Field 6, I met and spoke to a few other detectorists heading back to base. The first one, French, was giving up as whatever he did to his Deus he couldn’t stop the chatter. He had found nothing. Then a pair of French blokes who had also found nothing. Finally a pair of Eastern European blokes; they actually had a handful of stuff between them and showed it to me. The only item that looked significant was a small copper alloy triangle with a punched design of circles and what might have been the nub of a broken hook at the pointed end, which I said might be a clothes fastener. I met the finder later in the “village” and he told me it had been identified as a Norman fastener.

Got back to the “village” just before 2pm and had a pint of cider (£4) and a pizza from the wood-fired pizza van (£7). The pizza was well cooked and pretty good value though it could have done with a bit more in the way of toppings for the price. Still, it was a damned sight better than a 50p greasy donkey burger even if the Italians attending reportedly turned their noses up at it.

All in all the organisation, facilities and marshalling were absolutely first class. Unfortunately the same cannot be said of the state of all the fields (some were clearly much more detectable than others) nor of the finds. The two “big” finds that I heard of were both found on the Saturday – a Roman gold coin* which the FLO apparently got quite excited about as it was believed to be a rare one, and what appeared to be a gold and garnet Anglo-Saxon mount about the size of a large button. However the stuff displayed in the finds cases by the middle of Sunday afternoon was largely Roman grots, broken fibulae and similar odds and sods. Many attenders seem to have found nothing at all, not even buckles or buttons, though those who ventured to the fields reserved for Sunday, getting on for a mile from the “village”, did seem to have done better – rusty bucket notwithstanding.

Anecdotally I’ve read elsewhere that the FLO was disappointed overall and most of the attenders I spoke to were as well. For around 800 people detecting what must have been  1,000+ acres a few miles out of Burford there didn’t seem to be much to show, but I’ve now seen comments on a number of forums that these fields have been detected regularly by at least one large club, most recently only a few weeks ago. However this rather bears out what many people say – that you attend a rally for the social aspects and if the detecting is good it’s a bonus.

One sour note to the rally was the disappearance from the XP stand, announced late on Sunday afternoon just after the raffle was drawn, of a large plastic case for transporting a Deus. The example held up looked like a Samsonite sort of affair with padded foam interior. I’ve seen nothing more about this so don’t know if it turned up or not subsequently. Unfortunately this isn’t the first report I’ve come across of thefts at rallies.

* I’ve since read that this was not found at the dig but simply brought in for the FLO to identify and record.